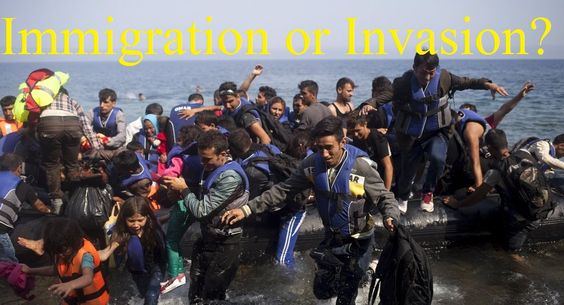 North and West Europeans was the vast majority of colonial settlers and first wave immigrants, and could/can be found throughout the country.

Second wave, was when everything started to go wrong:

The second wave of European Americans arrived from the mid-1890s to the 1920s, mainly from Southern, Central and Eastern Europe, as well as Ireland. This wave included Irish, Italians, Greeks, Hungarians, Portuguese, Spaniards, Romanians, Ukrainians, Russians, Poles and other Slavs. With large numbers of immigrants from Mexico, Spanish Caribbean, and South and Central America, White Hispanics have increased to 8% of the US population, and Texas, California, New York, and Florida are important centers for them.

Before 1881, the vast majority of immigrants, almost 86% of the total, arrived from northwest Europe, principally Great Britain, Ireland, Germany, and Scandinavia. The years between 1881 and 1893 the pattern shifted, in the sources of U.S. “New immigration”. Between 1894 and 1914, immigrants from southern, central, and eastern Europe accounted for 69% of the total. Prior to 1960, the overwhelming majority came from Europe or of European descent from Canada. The shift in European immigration has been in decline since the mid-20th century, with 75.0% of the total foreign-born population born in Europe compared to 12.1% recorded in the 2010 census.

They tried to prevent it from happening!

Prior to 1965, policies such as the national origins formula limited immigration and naturalization opportunities for people from areas outside Western Europe. Exclusion laws enacted as early as the 1880s generally prohibited or severely restricted immigration from Asia, and quota laws enacted in the 1920s curtailed Eastern European immigration. The civil rights movement led to the replacement of these ethnic quotas with per-country limits. Since then, the number of first-generation immigrants living in the United States has quadrupled.

Ancestry Groups In The United States

The Partition of Belgium – Germanic vs Non-Germanic

East Germans are not Eastern Europeans

Why are Argentina and Chile not like Australia and New Zealand?

Spain and Coronavirus | The WORST Recession in EUROPE?

Barcelona Gets Its Wish

Countries like Spain, Poland and  Romania has more votes than Netherlands.

Greece, Portugal, Czech Rep. and Hungary has more votes than Sweden and Austria.

Bulgaria has more votes than Denmark.

Why do these freeloaders have more influence than those who contribute the most?

After the accession of Croatia, on 1 July 2013, at least 260 votes out of a total of 352 by at least 15 member states were required for legislation to be adopted by qualified majority. Croatia had 7 votes (the same as Denmark, Ireland, Lithuania, Slovakia and Finland).[24]

From 1 July 2013, the pass condition translated into: 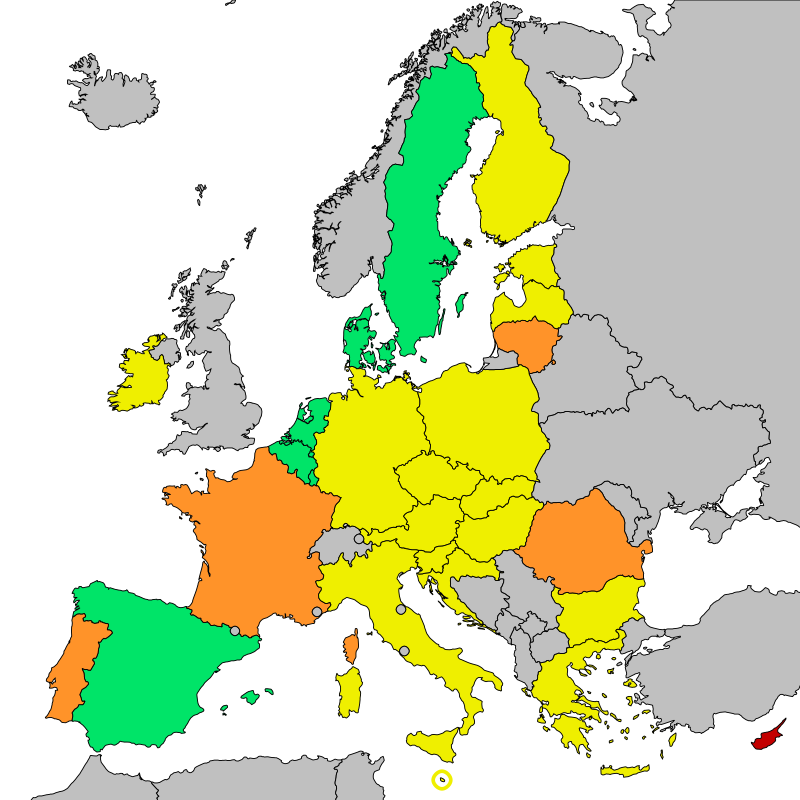 As you know, one accident rarely comes alone. The Coronavirus has triggered a huge bill, especially in countries already plagued by poor public administration and government debt. Therefore, the countries of the Euro zone, led by the governments of France, Spain and Italy, have convinced Germany to go along with the idea of borrowing €750 billion and provide them directly to the sectors, regions and industries in the euro zone most affectedisla by the crisis.

Who should administer the multibillion ‘recovery instrument’? Correct, that is the job of the geniuses in the European Commission. In Denmark, the idea has been promoted by the left, which since March has been pushing to get the Social Democratic government to agree to joint debt with the euro zone countries to show what they call ‘solidarity’.

Two questions arise. One is pecuniary: should the Danes really jeopardize their relatively good creditworthiness for German carmakers, the French oil industry, the Italian and Spanish tourism industries or all sorts of other sectors here and there, which are naturally affected by draconian shutdowns and their governments’ lack of health emergency systems? Are we to be held accountable for what Emmanuel Macron’s government did or what the Socialist government in Spain didn’t do? It seems a bizarre rationale.

Denmark is one of the four countries nicknamed the ‘Frugal Four’ – along with Austria, Sweden and the Netherlands – which had opposed grants as opposed to loans under the recovery fund, and also insisted on a seven-year EU budget not exceeding 1.0 percent of the blocs gross national income.

WHAT IS THE MFF?

The MFF sets the limits for EU spending over seven years, as a whole and for different areas of activity.

It is spent on a raft of areas ranging from farm subsidies and regional development, to security projects, Erasmus student exchanges, research, fighting climate change, managing migration, security and defence.

WHY IS IT SO DIFFICULT TO AGREE?

Poorer countries always argue that richer net contributors to the budget should pay more, and there is inevitably an acrimonious stand-off. A failure to agree by the start of 2021 risks a spending freeze on many critical projects.

The 2021-27 MFF is even harder because Britain’s exit from the EU means there is less money in the pot: the departure of the EU’s second-biggest net payer will leave a 75 billion euro hole in the seven-year budget.

The first nut to crack is just how big the budget should be.

European Council President Charles Michel has proposed a figure of 1.094 trillion euros, equivalent to 1.074% of the 27 countries’ gross national income (GNI). The European Commission has sought a bigger budget equivalent to 1.11% of GNI.

Net beneficiaries – mostly southern and eastern states that get more from the MFF than they put in thanks to cohesion funds and support for their farmers – like the Commission number. They stick together in a group called “The Friends of Cohesion”.

Net contributors frown even on Michel’s lower number, and an alliance known as “The Frugal Four” – Austria, Denmark, the Netherlands and Sweden – insist the budget must not exceed 1.0%.

Germany, the MFF’s biggest net contributor, is sometimes clubbed with these four but is expected to be more flexible.

France, the number two contributor, wants to safeguard CAP funding for its farmers but is uneasy about the fiscal impact of a budget at the upper end of the range.

Net contributors are also fighting to keep a system of “rebates”, reductions to their contributions based on a complicated corrections system. Former British Prime Minister Margaret Thatcher pioneered the rebate in the 1980s, but net beneficiaries say it must now be scrapped.

Why You Should Root for the “Frugal Four”

Denmark, Sweden, the Netherlands, and Austria need not only to keep up their opposition, but to gather additional support for the status quo. It is thoroughly irresponsible to condition southern European nations to continuous bailouts from the north in every crisis, while failing to pressure for any significant reforms in the absence of crises.

The “Frugal Four” are a blessing in this time of great irresponsibility.

Spain and Coronavirus | The WORST Recession in EUROPE?

With 28 countries and over €15.8 trillion in 2018 GDP (PPP) to its name, there’s no doubt the European Union (EU) is highly influential in economics and politics.

Perhaps not surprisingly, Germany and the UK are the top two net contributors in absolute terms. Combined, these two powerhouses had a GDP (PPP) of over €5 trillion in 2018.

At the other end of the scale, Poland tops the list of net beneficiaries with a deficit of -€11,632 million—more than double that of second-place Hungary. In the wake of the European sovereign debt crisis, Greece and Portugal slide into fourth and fifth place respectively.

When population is taken into account, these rankings shift dramatically. Per capita, the Netherlands tops the list with €284 contributed per resident, whereas Luxembourg lands in last place with a deficit of -€2,710. The small country is home to many EU institutions, resulting in high administrative spending: in 2018, administration amounted to 80% of total expenditures.

Here’s a full ranking of the 28 member states, in both absolute (€M) and per capita (€ per resident) terms:

“More than €250 billion were or will be spent since Poland joined the bloc with other former communist states in 2004. In today’s dollars, that’s equivalent to more than the US-funded Marshall Plan provided to western Europe after the second World War.”

Dannebrog holds the world record of being the oldest continuously used national flag.

The only cure for WHITE GENOCIDE

The European Defence Agency (EDA) is an agency of the European Union (EU) that promotes and facilitates integration between member states within the EU’s Common Security and Defence Policy (CSDP). The EDA is headed by the High Representative (HR/VP), and reports to the Council. The EDA was established on 12 July 2004 and is based in the Kortenberg building in Brussels, Belgium, along with a number of other CSDP bodies.

All EU member states take part in the agency, except Denmark, which has opted out of the CFSP.

The EDA and the European External Action Service (EEAS) together form the Secretariat of the Permanent Structured Cooperation (PESCO), the structural integration pursued by 25 of the 28 national armed forces of the EU since 2017.