Danes (Danish: danskere) are a North Germanic ethnic group native to Denmark and a modern nation identified with the country of Denmark. This connection may be ancestral, legal, historical, or cultural.

Danes generally regard themselves as a nationality and reserve the word “ethnic” for the description of recent immigrants,sometimes referred to as “new Danes”.

The contemporary Danish ethnic identity is based on the idea of “Danishness”, which is founded on principles formed through historical cultural connections and is based on racial heritage.

Early history
Denmark has been inhabited by various Germanic peoples since ancient times, including the Angles, Cimbri, Jutes, Herules, Teutones and others. The first mentions of “Danes” are recorded in the mid-6th century by historians Procopius (Greek: δάνοι) and Jordanes (danī), who both refer to a tribe related to the Suetidi inhabiting the peninsula of Jutland, the province of Scania and the isles in between. Frankish annalists of the 8th century often refer to Danish kings. The Bobbio Orosius from the early 7th century distinguishes between South Danes inhabiting Jutland and North Danes inhabiting the isles and the province of Scania. 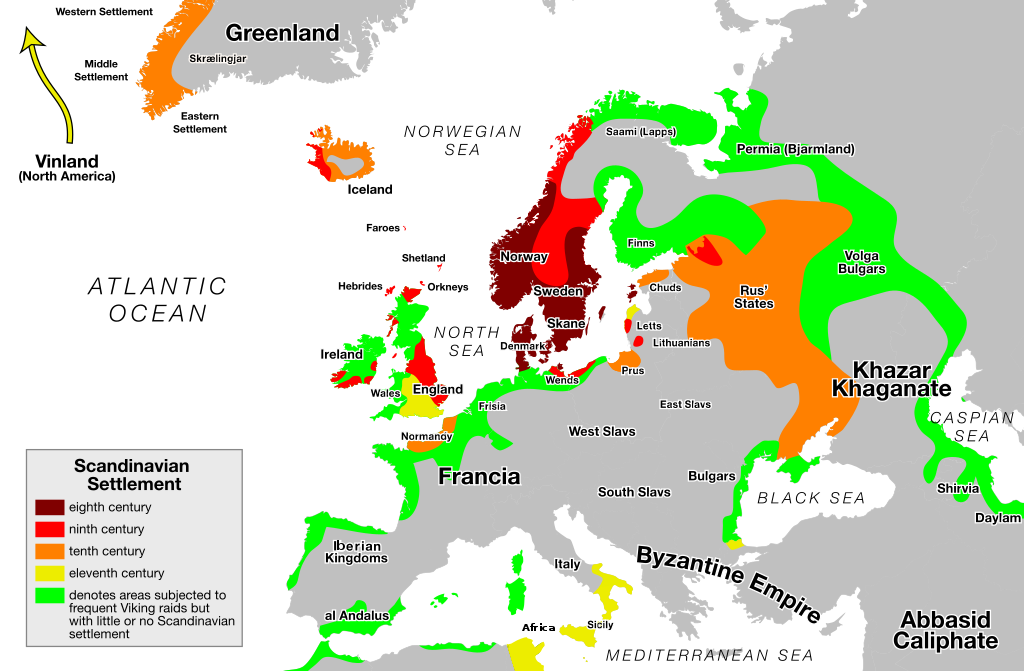 Viking Age
The first mention of Danes within the Denmark is on the Jelling Rune Stone, which mentions the conversion of the Danes to Christianity Harald Bluetooth in the 10th century. Between c. 960 and the early 980s, Bluetooth established a kingdom in the lands of the Danes, stretching from Jutland to Scania. Around the same time, he received a visit from a German missionary who, by surviving an ordeal by fire according to legend, convinced Harold to convert to Christianity.

The following years saw the Danish Viking expansion, which incorporated Norway and Northern England into the Danish North Sea Empire. After the death of Canute the Great in 1035, England broke away from Danish control. Canute’s nephew Sweyn Estridson (1020–74) re-established strong royal Danish authority and built a good relationship with the archbishop of Bremen, at that time the archbishop of all Scandinavia. Over the next centuries, the Danish empire expanded throughout the southern Baltic coast. Under the 14th century king Olaf II, Denmark acquired control of the Kingdom of Norway, which included the territories of Norway, Iceland and the Faroese Islands. Olaf’s mother united Norway, Sweden and Denmark into the Kalmar Union. 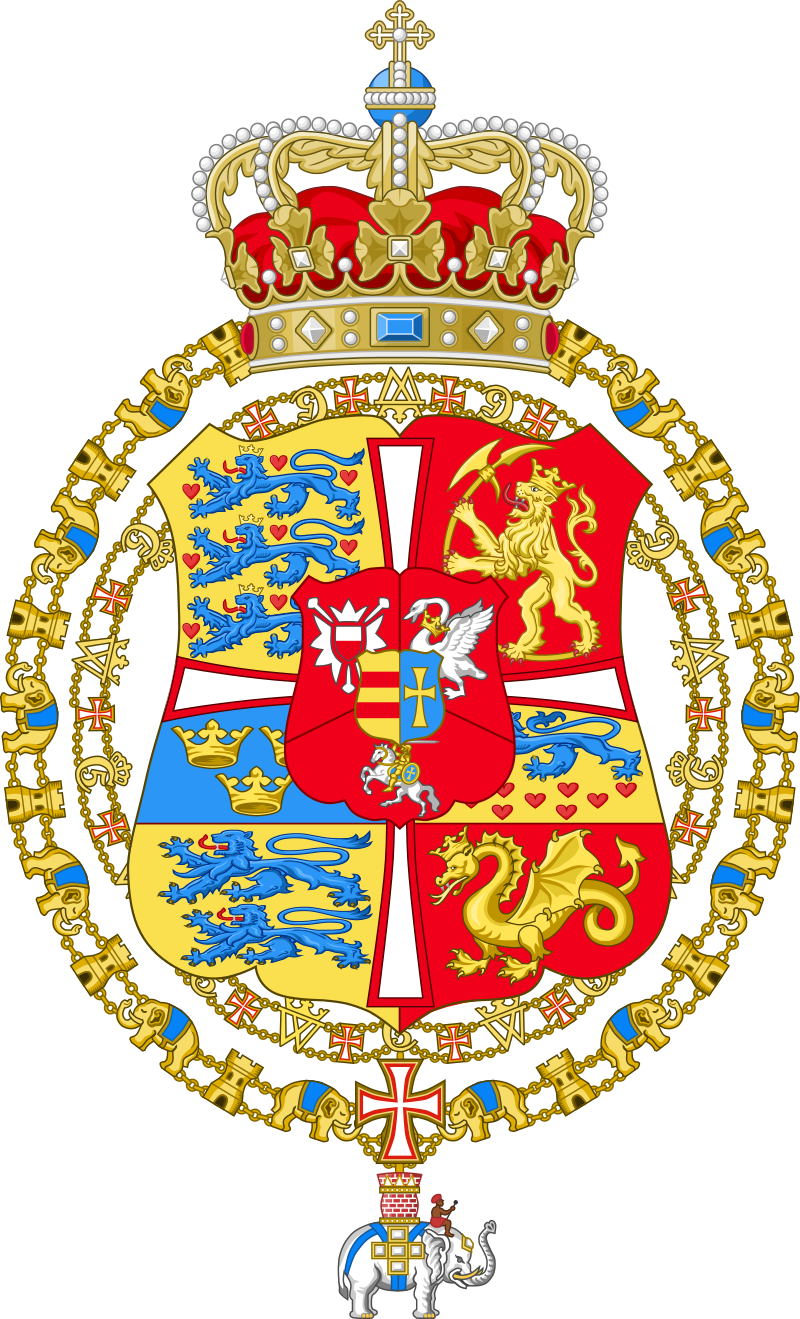 Denmark-Norway
In 1523, Sweden won its independence, leading to the dismantling of the Kalmar Union and the establishment of Denmark-Norway. Denmark-Norway grew wealthy during the 16th century, largely because of the increased traffic through the Øresund. The Crown of Denmark could tax the traffic, because it controlled both sides of the Sound at the time.

The Reformation, which originated in the German lands in the early 16th century from the ideas of Martin Luther (1483–1546), had a considerable impact on Denmark. The Danish Reformation started in the mid-1520s. Some Danes wanted access to the Bible in their own language. In 1524, Hans Mikkelsen and Christiern Pedersen translated the New Testament into Danish; it became an instant best-seller. Those who had traveled to Wittenberg in Saxony and come under the influence of the teachings of Luther and his associates included Hans Tausen, a Danish monk in the Order of St John Hospitallers.

In the 17th century Denmark-Norway took back Greenland.

After a failed war with the Swedish Empire, the Treaty of Roskilde in 1658 removed the areas of the Scandinavian peninsula from Danish control, thus establishing the boundaries between Norway, Denmark, and Sweden that exist to this day. In the centuries after this loss of territory, the populations of the Scanian lands, who had previously been considered Danish, came to be fully integrated as Swedes.

In the early 19th century, Denmark suffered a defeat in the Napoleonic Wars; Denmark lost control over Norway and territories in what is now northern Germany. The political and economic defeat ironically sparked what is known as the Danish Golden Age during which a Danish national identity first came to be fully formed. The Danish liberal and national movements gained momentum in the 1830s, and after the European revolutions of 1848 Denmark became a constitutional monarchy on 5 June 1849. The growing bourgeoisie had demanded a share in government, and in an attempt to avert the sort of bloody revolution occurring elsewhere in Europe, Frederick VII gave in to the demands of the citizens. A new constitution emerged, separating the powers and granting the franchise to all adult males, as well as freedom of the press, religion, and association. The king became head of the executive branch.

Identity
Danishness (danskhed) is the concept on which contemporary Danish national and ethnic identity is based. It is a set of values formed through the historic trajectory of the formation of the Danish nation. The ideology of Danishness emphasizes the notion of historical connection between the population and the territory of Denmark and the relation between the thousand-year-old Danish monarchy and the modern Danish state, the 19th-century national romantic idea of “the people” (folk), a view of Danish society as homogeneous and socially egalitarian as well as strong cultural ties to other Scandinavian nations.

As a concept, det danske folk (the Danish people) played an important role in 19th-century ethnic nationalism and refers to self-identification rather than a legal status. Use of the term is most often restricted to a historical context; the historic German-Danish struggle regarding the status of the Duchy of Schleswig vis-à-vis a Danish nation-state. It describes people of Danish nationality, both in Denmark and elsewhere. Most importantly, ethnic Danes in both Denmark proper and the former Danish Duchy of Schleswig. Excluded from this definition are people from the formerly Norway, Faroe Islands, and Greenland; members of the German minority; and members of other ethnic minorities.

Importantly, since its formulation, Danish identity has not been linked to a particular racial or biological heritage, as many other ethno-national identities have. N. F. S. Grundtvig, for example, emphasized the Danish language and the emotional relation to and identification with the nation of Denmark as the defining criteria of Danishness.

Modern Danish cultural identity is rooted in the birth of the Danish national state during the 19th century. In this regard, Danish national identity was built on a basis of peasant culture and Lutheran theology, with Grundtvig and his popular movement playing a prominent part in the process. Two defining cultural criteria of being Danish was speaking the Danish language and identifying Denmark as a homeland.

The ideology of Danishness has been politically important in the formulation of Danish political relations with the EU, which has been met with considerable resistance in the Danish population, and in recent reactions in the Danish public to the increasing influence of immigration.

Number of immigrants in Denmark in 2018, by top 20 countries of origin.

The Ethnic Distribution of Denmark

Travelling bands of criminal foreigners a major headache for Denmark

Denmark: 10 out of 12 Rapes Committed By Migrants

Diaspora
See also: Scandinavian diaspora
Danish diaspora consists of emigrants and their descendants, especially those who maintain some of the customs of their Danish culture. A minority of approximately fifty thousand Danish-identifying German citizens live in the former Danish territory of Southern Schleswig, now located within the borders of Germany, forming around ten percent of the local population. In Denmark, the latter group is often referred to as “Danes south of the border” (De danske syd for grænsen), the “Danish-minded” (De Dansksindede), or simply “South Schleswigers”. Due to immigration there are considerable populations with Danish roots outside Denmark in countries such as the United States, Brazil, Canada and Argentina.

Danish Americans (Dansk-amerikanere) are Americans of Danish descent. There are approximately 1,500,000 Americans of Danish origin or descent. Most Danish-Americans live in the Western United States or the Midwestern United States. California has the largest population of people of Danish descent in the United States. Notable Danish communities in the United States are located in Solvang, California and Racine, Wisconsin, but these populations are not considered to be Danes for official purposes by the Danish state, and heritage alone can not be used to claim Danish citizenship, as it can in some European nations.

Racine has the largest North American settlement of Danes outside of Greenland.

The city has become known for its Danish pastries, particularly kringle. Several local bakeries have been featured on the Food Network highlighting the pastry.

According to the 2006 Census, there were 200,035 Canadians with Danish background, 17,650 of whom were born in Denmark. Canada became an important destination for the Danes during the post war period. At one point, a Canadian immigration office was to be set up in Copenhagen.

Number of immigrants in Denmark in 2018, by top 20 countries of origin.

The Ethnic Distribution of Denmark

Travelling bands of criminal foreigners a major headache for Denmark

Denmark: 10 out of 12 Rapes Committed By Migrants

Sverigestan submit to your Danish overlords!

Denmark is where I live and die! My fatherland

Greenland belongs to Denmark and the Danish people!

What If Scandinavia United Into One Country

If DANES ruled the world

Are Scandinavian people a different race?

Scandinavians, Why Do They All Have the Same Name?

A fire that can never be turned off.